More
WorldThe effigy of PM Modi burnt in this country will be jailed,...
World

The effigy of PM Modi burnt in this country will be jailed, the government is strict on anti-India demonstrations

The Home Ministry has said in a statement that for the past few days, slogans are being raised against the Prime Minister of a friendly country to malign him.

The new government in Nepal has taken strict orders against burning an effigy of Indian Prime Minister Narendra Modi and shouting slogans against him. On behalf of the government, the Ministry of Home Affairs has issued two consecutive statements in this regard within 24 hours. It says that legal action can be taken for protesting against India without any reason and burning the effigy of Prime Minister Modi. The spokesperson of the Ministry of Home Affairs of Nepal expressed regret over the incident of burning the effigy of the Prime Minister of the friendly nation and took it seriously.

protests due to this
A Nepali youth died after falling into the Kali river adjoining Pithoragarh, the border district of Uttarakhand. Since then the anger of the people there has flared up. People protesting in Nepal allege that SSB is responsible for the death of the youth. People allege that when the youth was crossing the river with the help of a wire, the SSB had cut the wire. The SSB has neither denied the allegations. After the death of the youth, the youth wing and student wing of the Communist Party, which is in power in Nepal, are protesting and burning the effigy of India’s PM Narendra Modi. 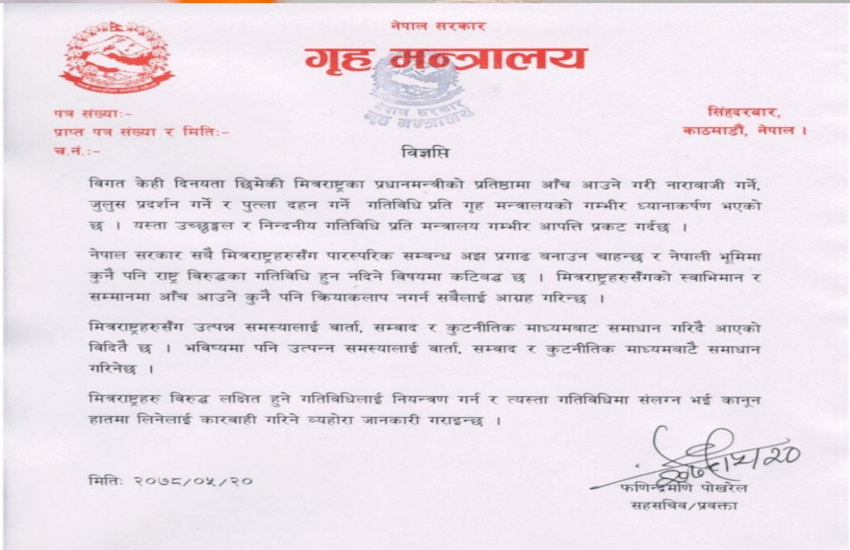 Share
Facebook
Twitter
Pinterest
WhatsApp
Telegram
Previous articleIndia should ‘wait and watch’ the current situation in Afghanistan, know what advice was given by former diplomats
Next article‘I do not disagree with Pinarayi, I see the Paranari phrase as political’; NK Premachandran says no one can say what tomorrow will bring

He would never have been on the team if he had;...

Ferran Torres suffers a fracture in his right foot

Ravi Shastri to step down from Indian coaching staff to join top...

Catching the monsoon, look back at Balmain’s enchanting light-catching outfits